“Ideas are shit, execution is the game.”

I have come to the conclusion that truer words may have never been spoken. If you haven’t heard of Gary Vaynerchuck, you should right now. The quote was made famous to me in this video. (I strongly recommend you continue down the rabbit hole of his content; it’s invaluable and free.) In fact, one more plug for Gary, I know he’s going big on Snapchat right now, add him up: @garyvee.

Here’s the thing, everyone has ideas. I have hundreds, you have hundreds; if we sat around and talked about our ideas we could come up with the next hundred billion-dollar companies that will be created over the next 100 years and then say ‘I had that idea.’ That’s where ideas alone get you—regret.

Ideas are worth nothing! McDonald’s wasn’t the first burger joint created. It was founded in 1955; whereas, Burger King was created in 1954*. That being said, both are multi-billion dollar companies today. If all it took was ideas, you too could sell burgers in a restaurant and have a billion dollars. What’s between you now and this billion-dollar business? Work.

WhatsApp wasn’t the first chat application, yet it sold for between 19 and 22 billion dollars to Facebook (depending what website you read.) What makes them different? Execution. Actions. Work. Smart work. Hard work. Every kind of work you can imagine.

This was basically the preface to this story—your idea is worth shit unless you work.

Towards the end of 2014 my best friend, Jason Buenen, and I have talked about building a business together. Something that mixes my love for business and design with his love for art. Naturally, we decided to start an apparel company — a multi-hundred-million dollar idea. We actually had some super ambitious ideas for it, but for the time it was too ambitious and I was still cleaning up the mess from my previous startup, Taste Locally.

Fast-forward about a year and I’m deciding it’s time to get back into entrepreneurship again. After working full-time for about 10 months, it’s time to step back into the ring after being thrown out. I decided to pursue several zero-to-very-low cost ideas in my time outside of my day job—Elevate is one of those ideas.

I called Jason up one night and we chatted for a few hours and decided to pursue Elevate again. I can’t remember the day exactly, but it was right before Christmas. Two weeks of holidays later and it was time to begin working.

We launched Elevate in a just over a week with only a $45 investment into it; the domain name, and a Shopify subscription. It doesn’t take much to start, but here’s the thing: hard work alone isn’t enough; you need Talent, Hustle, and Patience; I’ll expand on that in another post in the future.

We launched Elevate with only a $45 investment.

We decided to just launch and start taking pre-orders. We knew what we wanted our product to look like in the end. Luckily, Jason and I have similar tastes which make those disagreements few and easy-to-solve. I searched online and found a great free sweater PSD where we could put art pieces on to help people visualize the product, but cost us nothing at all. We sourced out the products we wanted to use before we launched that we could easily order everything we needed as soon as we had the orders. We were efficient in launching Elevate, but we weren’t unprepared.

Talent isn’t a variable for success, quality is. You can always outsource the things you don’t have the ability for; it’ll just cost you. Talent is a short-cut. 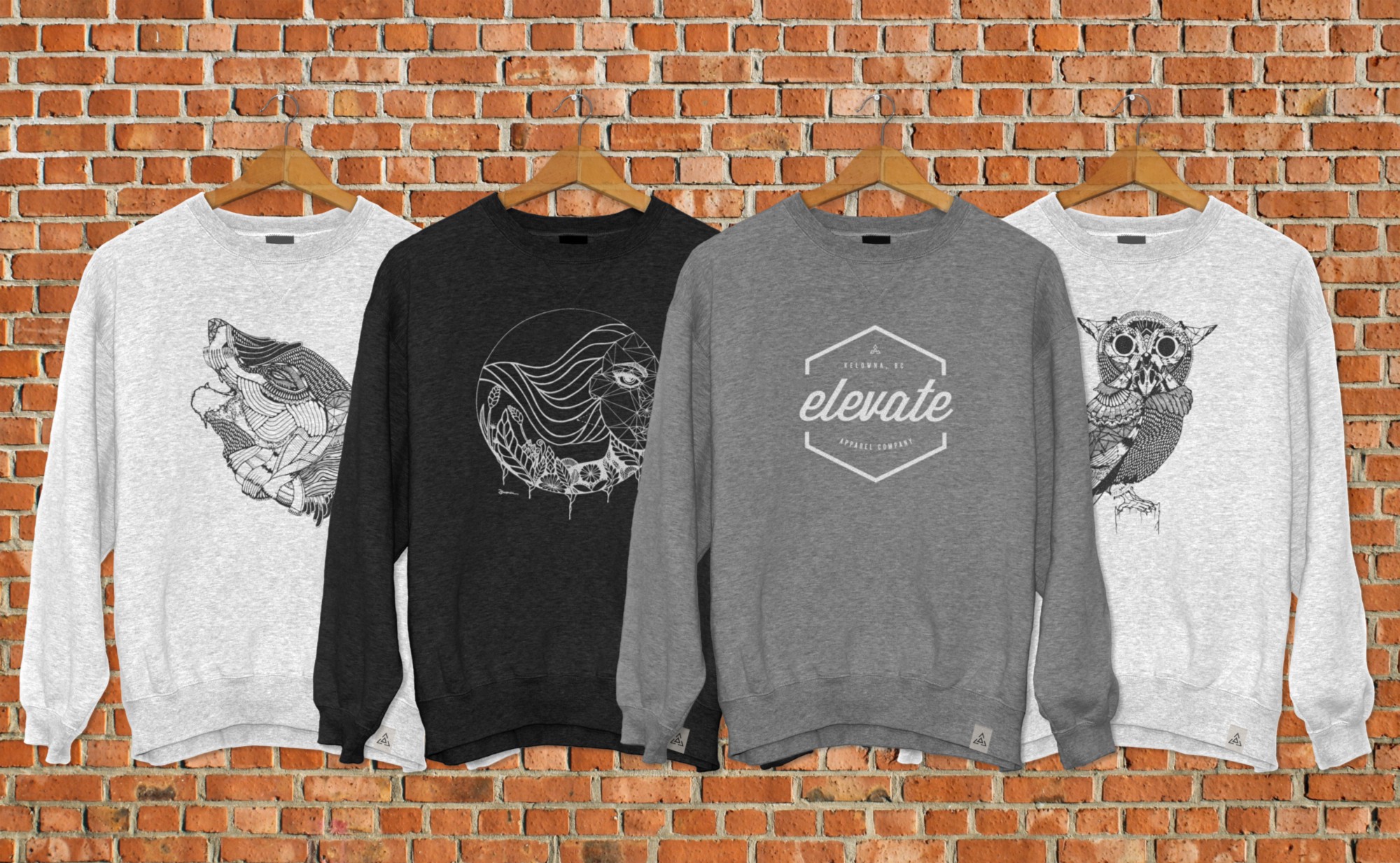 We launched Elevate yesterday morning at 12:00 am. We had our first order at 12:03 am. (Full disclosure: it was Jason’s girlfriend who waited up with us to be the first to order. Thanks, Justine!) We went to bed shortly after 1 am after testing to make sure everything was working smoothly. I woke up at 7:30 am to $360 in sales in the time I slept. Within 12 hours of launch we had 10x our initial investment in sales, and by the end of the day, we 13x’d it. Surely someone will respond here with: “13x-ing $45 isn’t hard.” Truthfully, it’s not, but when you only spend 1 week and $45 with no purchased advertisements, it’s not something to be mocked either. (More full disclosure: I ran a Facebook ad for about a day which got a few impressions and cost $1.32 with no conversions. I stopped it because I wanted to try the first week with no paid advertising.)

If Jason’s art wasn’t as great as it is, the product would suck and not sell. If we couldn’t visualize his art on sweaters properly, it wouldn’t have sold. If we didn’t spend hours every day on Instagram connecting, commenting, liking and engaging with hundreds of people the week before, it wouldn’t have had as many sales. If we didn’t leverage our network which we built up by giving value and building relationships with over the past year, it wouldn’t have done so well.

The product quality is important because you can’t sell shit. Hard work is important and you have to be willing to sacrifice your time and other things you may love, and put it into the business. There was no time spent White Collar that week; it was all just work.

This is only the beginning to the Elevate story. We are currently busy getting the sweaters that were pre-ordered out to the lovely folks that bought them. Over the next few weeks, I’m planning to re-invest the money we are making from sales to test various advertising methods from Google’s Remarketing & Display Network, Instagram Ads, Facebook UnPublished Posts & Sponsored Posts, as well as partnering with a lot of Instagram Influencers and affiliates. In future articles, I’ll go over what my goals were for each and how they converted. If you have suggestions or are interested in seeing a particular ad method, hit me up on twitter.

Follow me on Medium if you want to keep up to date with that! :)

Shameless Plug: go to www.elevateapparel.co and use the promo code IAMAWESOME during the checkout to get 20% your order because you truly are awesome. Free shipping in Canada, $10 to the USA, and $20 international.

*The McDonalds and Burger King facts were found by super quick Google searches and Wikipedia entries, they may not be 100% accurate.

Originally posted on my Medium

Get my latest in your inbox!

I hate spam too! You won’t get any from me.